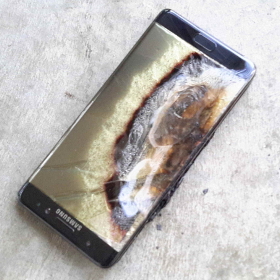 In a statement published in the Korean version of the company’s site, Samsung Electronics announced that it will recycle part of the items, withdrawn from the market, of the unsuccessful phablet Galaxy Note 7.
The manufacturer asserts that they will extract 157 tonnes of rare metals from devices including gold, cobalt and copper.
Last September, after a number of cases of self-ignition, the sales of the phablets Note 7 were suspended but Samsung announced that they plan to renew them and sell them instead of discarding them. In its new message the company says that it will restore the components such as OLED displays, modules of the camera and memory chips and will re-use them for recycling or repair.
Many companies have announced the initiative to reduce the adverse impact on the planet after the explosive fiasco of the product, among them, the main competitor of Samsung – Apple as well, which announced that it found a way to use only renewable materials in its products. Not to fall behind, the Korean company pointed out that it will work on new ways for recycling and will be actively involved in the battle for the protection of the environment.

2017-11-15
Previous Post: New Euro-rules force us to rethink the coal power plants
Next Post: “99% decrease of the plastic waste imported in China”