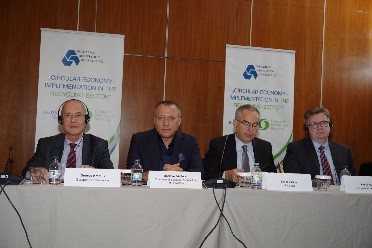 Crimes related to ferrous and non-ferrous metals have fallen as much as 5 times in the last five years, it became clear during the Round Table Economy – implementation in the recycling sector, currently being organized by the Bulgarian Recycling Association (BAR) in hotel Balkan.

The third annual BAR conference brought together experts, companies from the recycling sector, representatives of the European Commission, the European Parliament, the National Assembly, the Ministry of the Environment and the Environment, organizations and institutions at European and national levels.

Before them, the Chairman of the Board of BAR Borislav Malinov announced with pride that crimes with ferrous and non-ferrous metals have decreased as much as 5 times in the last five years.

In his speech, he pointed out that thanks to the measures proposed by the Bulgarian Recycling Association in the current Waste Management Act, there were many positive effects for the circular economy and for the state.

These include: removal of scrap sites from residential areas; video surveillance of waste disposal sites; company and site bank guarantees; sanctions for violators from 15 000 to 100 000 bgn; withdrawal of authorization in the second offense.

“The circular economy aims to extend the product life cycle. In practice, this means a longer use of the product, reuse, repair and recycling of existing materials and products. When a product reaches the end of its life, the materials of which it is composed continue to be reused, but otherwise. This is done again and again, thus minimizing waste disposal.

In this way, waste disposal, use of raw materials and energy consumption are simultaneously reduced, ”said the Chairman of the Board of BAR, Borislav Malinov.

The conference “Circular Economy – implementation in the recycling sector ” continues with the participation of companies from the industry, experts, representatives of the European and Bulgarian institutions.

Among them are the Honorary Director of the Directorate-General for the Environment at the European Commission George Kremlis, Deputy Minister of Environment and Water Nikolay Kanchev, EuRIC Secretary General Emanuel Katrakis, Patrick Kolar – Head of EASME at the EC and many others.

2019-03-22
Previous Post: The package “Circlular Economy” was published in the Official Journal of the EU on 14 June 2018.
Next Post: Second partner meeting under the CircPro in Spain